Product prices and availability are accurate as of the date/time indicated and are subject to change. Any price and availability information displayed on [relevant Amazon Site(s), as applicable] at the time of purchase will apply to the purchase of this product.

Usually dispatched within 5 to 7 days 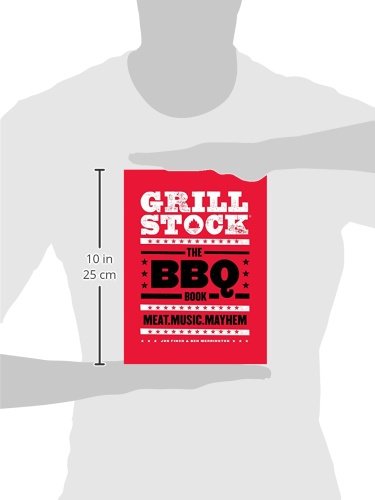 If you've eaten in their Smokehouses or hung out at their Festivals, you'll know that Grillstock know a thing or two about low 'n' slow barbecue. They have been pioneers of the American barbecue scene in the UK since 2010 with their original BBQ and music festival, Grillstock, which sees top pit-masters compete from the world over and their chain of smokehouses bringing truly authentic BBQ to cities across the UK. Stacked with more than 100 recipes - including Grillstock secrets - the book includes favourites from the Smokehouse menus, tips on mastering the low 'n' slow style, some epic meaty feasts and unique recipes from some of the BBQ competition teams and rock stars that have cooked and played at their annual festivals. With chapters focussed on the core meats of any great BBQ meal, Pork, Beef, Chicken and Ribs, the art of smoking meat, plus further chapters on burgers, fixin's (sides), rubs 'n' sauces' and finally 'slurps'. You'll have all you need to create everything from smokin' dinners for two to the ultimate BBQ feast. Prepare to be King of the Grill in your own backyard. Praise for Grillstock restaurants and events: 'I'm still amusedly flabbergasted by my majorly American weekend of downhome flavour from back home (then) near my London home (now) feasting. Grillstock London was BBQ blast and a low and slow experience I look forward savouring again' Chris Osburn Huffington Post 'Proper barbecue heaven' Daily Mail 'One of the 8 Best Rib Joints in Britain' Esquire 'You may as well accept that you will leave with sauce splattered down your shirt and chin' Mark Taylor Crumbs Magazine 'Not strictly the UK's only serious competition BBQ meet but, in my own hopelessly biased opinion, the best, and, for fans of American low-and-slow meat cooking, about as much fun as you can have with your clothes on. You could almost be in Kansas' Chris Pople, Cheese and Biscuits 'Music festivals are good and all, but have you ever been listening to a band and thought

There are no reviews yet.

Be the first to review “Grillstock: The BBQ Book” Cancel reply

This site uses Akismet to reduce spam. Learn how your comment data is processed.